Brad Pitt and Angelina Jolie may be one of the wealthiest couples in the world but they don’t splash the cash during the festive season. 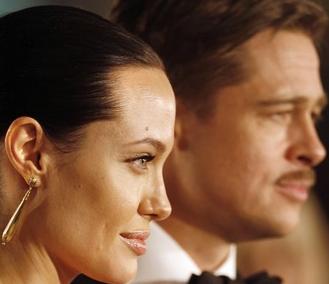 In the interview, Brad Pitt opened up as he gave a glimpse into Christmas at home with the Jolie-Pitts.

On special homemade Christmas presents, the “Babel” actor revealed: “We do exchange gifts, although we don’t feel any great pressure to make them big or expensive gifts. And the kids don’t ask for the big gifts for the reason that they don’t see a lot of the American cartoon television, which is packed with all those manipulative commercials for big toys that look so fantastic. When they do see that stuff is when they start asking for the toys, so we figure if they don’t see them they won’t know they’re there.”

He continued: “So we have gifts, but we try to keep the money spent to a minimum. The rule is that everyone’s got to make something for someone else, you got to put time into it.”

He added: “Then, when they give to each other, it’s really sweet. The gift-giving is a very nice time for us. It’s chaos at times but there’s so much joy in our house right now.”

Speaking about his family life, Brad Pitt said cheerfully: “We haven’t found any reason to stop yet. It’s chaos at times but there’s also such joy in our house right now. I look down at the family and I see our boy from Vietnam (Pax) and our daughter from Ethiopia (Zahara) and our girl’s from Namibia (Shiloh was born there) and our son who’s from Cambodia (Maddox), and… they are all brothers and sisters, man.”

As for some fatherly tips, he shared: “You know the secret of good nappy-changing? You got to do it quick. There’s something about the air contact that makes them want to go again, so you got to get in there and get them changed before that happens, because those things stink! I’m pretty good at being quick, I must say – got it down by now.”