Bret Michaels performed at the Tony Awards, and all he got was a nose fracture _ and a busted lip. 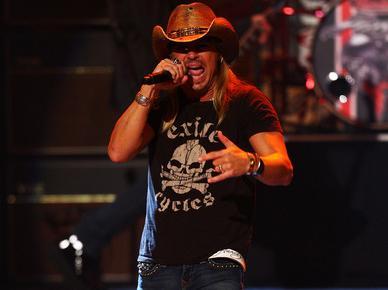 According to Michaels’ spokeswoman, the rock singer had X-rays taken after getting clocked in the head by a descending set piece at Sunday’s Radio City Music Hall ceremony.

Publicist Joann Mignano says Michaels, who performed with his 1980s hair-metal band Poison, fractured his nose and had to get three stitches in his lip. She says he was getting a CAT scan on Monday as a precaution, as he’s had a past neck injury.

Although he’s “pretty bruised up,” Mignano says, Michaels was in good spirits. He wiped off blood with a towel and laughed backstage when host Neil Patrick Harris joked that the singer “gave head banging a whole new meaning.”

Michaels took to the stage with Poison during the telecast’s opening production number, featuring performances from the season’s Broadway musicals.

They performed “Nothin’ But a Good Time” with the cast of “Rock of Ages,” and as Michaels exited the stage, he smacked into a piece of scenery and was knocked to the ground upon impact. Footage of the accident soon landed online, where Michaels’ pratfall seemed to score as much attention as the prestigious ceremony itself.

Michaels had a “great time performing for the Broadway audience,” says Mignano, who notes that the star of VH1’s “Rock of Love” reality series took photos backstage with theater legends Liza Minnelli and Angela Lansbury.

Michaels, who has gone solo, is touring with his namesake band. Later this month, he’ll take Poison on the road for a joint tour with Def Leppard and Cheap Trick.