Britney Spears was sporting immaculate make-up and her blonde hair while stepping out of her hotel. 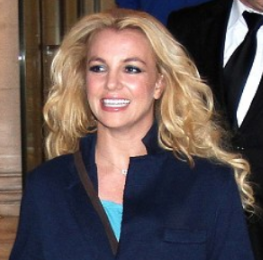 The singer looked chic while wearing a navy blazer, skinny jeans and brown heels. She was accompanied by her boyfriend Jason Trawick and her sons Sean Preston and Jayden James. Meanwhile, Britney is going to perform tonight at Palais Omnisports de Paris-Bercy in the east of the city. Her Femme Fatale tour doesn’t finish till early December.