Britney Spears graces the cover of January’s Glamour magazine as she opened up about her “crazy year,” her new album Circus and her future. 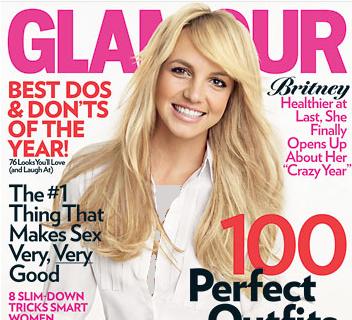 The “Womanizer” singer referred to her forced psychiatric hospitalizations, loss of custody of her two sons and infamous head shaving as “The whole year has been a hell of a year for me.”

She also revealed that recording her latest album Circus, which drops Tuesday on her 27th birthday, “has helped take my mind off certain things.” She also added: “For me, my music is therapy.”

The singer, who made her first live performance Wednesday in Germany, also admits she “didn’t know exactly where I stood with everyone” after the past year.

The pop singer, who swept the 2008 MTV Video Music Awards, continued: “When I received the awards and [the audience] stood for me, it showed me how much love is out there.”

Her life is calmer these days as she explained: “I don’t like going out. I hate clubs. I hate being around too many people. I love my home and staying in bed and watching Dancing With the Stars or reading a Danielle Steel novel. I’m kind of boring.”

She’s also been hitting the gym.

On her post-baby body, the singer shared: “My body…completely changed [after giving birth], and I have had to work hard at getting it back.”

On her goals for 2009, she added: “I would like to stop worrying so much, because I worry all the time. And to learn how to be happier, just in general. I have to learn to take things not so seriously. And to stop biting my nails!”

For more, get the latest issue of Glamour magazine, which is expected to hit on stands Dec. 9.