On Tuesday, Britney Spears will kick off her anticipated Circus tour in New Orleans surrounded by fans – and touched by the support of her family. 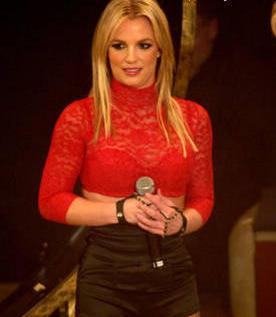 Spears’s aunt, Linda Ann Brandon-Kjos said: “I am so excited for her, and I wish I could be there. All the family is there and supporting her. I’m sure that she is going to be just fine. I think it is going to be something really special.”

After spending the weekend with family in Kentwood, Spears, 27, has arrived in New Orleans in advance of her show at the New Orleans Arena. The singer’s set-list, which was revealed Monday, shows that she’ll perform a mix of old and new hits. Spears, who is the new face of Candie’s, also released a short video preview of the concert on her Web site, with a longer version on the Candie’s site.

Sources close to the pop star have said that she has been working hard preparing for the show, which will include a three-ring circus set-up and magic tricks.

While expectations are high, some in Spears’s inner-circle have expressed some hesitation – even nerves – about her return to the stage.

“[Her family] is worried that this might be too much pressure for her,” says a family friend. “Is it too soon? It wasn’t that long ago that she was falling apart and now the pressure is on and it’s a lot.”

Adds the family friend: “It’s hard because she is such a pleaser and has always worked hard. When she was younger, she was a perfectionist and went over and over things in her routines to get them just exactly right. She says she is ready, but who is she doing this for?”

One possibility: Her fans. And they are excited about the shows.

“A lot of people got tickets really early,” Travis Bergeron, 24, a New Orleans resident, and Spears fan, tells PEOPLE. “I’ve got seats on the eighth row right above floor level. One of my friends knew I was obsessed and got me tickets as a Christmas gift. I’m a huge, huge, huge Britney fan.”