Britney Spears is reportedly furious that her sister did not come to her with the news that she was pregnant, according to a family insider. 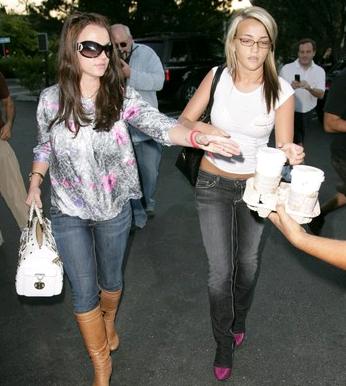 The insider revealed, “Britney felt betrayed and left out when Jamie Lynn did not come to her first.”

When photographers broke news of the pregnancy to the troubled pop singer, Britney Spears called her sister and became upset when she wouldn’t answer or return her call. The reason Jamie Lynn was avoiding her older sis: she’s afraid of Britney’s rage.

The insider added that Jamie Lynn often had to suffer her sister’s tantrums when they were growing up, saying, “Jamie Lynn has a very soft personality. She loves Britney, not Britney’s temper.”

Though the Spears sisters have since spoken about the pregnancy, their conversations have been “clinical” and awkward.

The source revealed, “Their relationship is estranged. Jamie Lynn does not recognize Britney as the sister she grew up with, so she has gone to her friends, her boyfriend and her mom when she needs someone.”

Though the “Gimme Mre” singer and her mother have been on the outs since the Spears family forced the singer into rehab last February, her relationship with Jamie Lynn has only become strained over the past few months.

The source added, “It is mostly by Britney’s choice. She is so self-absorbed in her own life that she has forgotten what is important in life, like her family.”

It seems the sisters are not going to be bonded over motherhood any time soon. Another source revealed that the sisters aren’t even spending the holidays together.