Britney Spears and her paparazzi beau Adnan Ghalib were indeed at the place of worship on Monday following her quick visit to the courthouse, confirmed by the spokesperson for the Little Brown Church in Van Nuys, California. 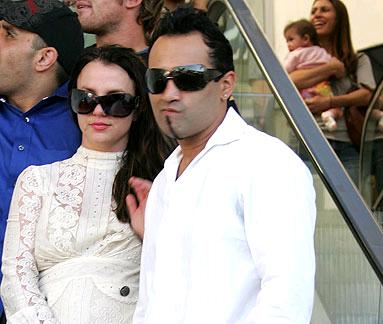 And witnesses revealed that the pop star had a minor meltdown inside but it is impossible for the pair to get hitched since Adnan already being married and no one but the nighttime caretaker on-hand.

The church’s spokesperson has also been confirmed that no weddings were held today or booked for the next week, saying, “No weddings were booked because the pastor’s stepmother passed away and he is out of town attending the funeral. The church is a place of prayer open 24 hours of day for people seeking peace.”

Following the quick visit to the church, the pair headed over to Gaucho Grill on Ventura Blvd., where they are enjoyed a meal together with Sam Lutfi, who drove them both to and from the courthouse this afternoon.

According to eyewitness, Britney Spears “had cried all of her makeup off. She needed help walking and standing.”

The pop star was driven back to her home behind the gates of The Summit around 3:45pm PT, and she is not expected to attempt to make an appearance at the court again today.

Meanwhile, the Associated Press reportedly has issued a release telling their affiliates that Britney is huge news, no matter what she does and where she does it. They have that part right, everyone wants to read about Britney and look at her wild flashing photos where she reveals lots of skin for the paparazzi. She even dressed up in her old wedding dress this weekend to show off for photographers as she made her way through a car dealership with her new paparazzi beau.

An internal memorandum from The A.P.’s Los Angeles bureau on Tuesday prompted some punch lines at the news service’s expense.

Frank Baker, the Los Angeles assistant bureau chief, wrote “Now and for the foreseeable future, virtually everything involving Britney is a big deal.”

In an interview last week, Lou Ferrara, the managing editor for sports, entertainment and multimedia, defended Mr. Baker’s message, saying, “If you’re an editor in L.A. and Britney Spears is in your backyard, you want to know everything about that story.”