Britney Spears graced the cover of the “Blender” magazine but the body in the picture did not belong to the troubled pop singer since there was a casting call of Blender for a Britney body double. 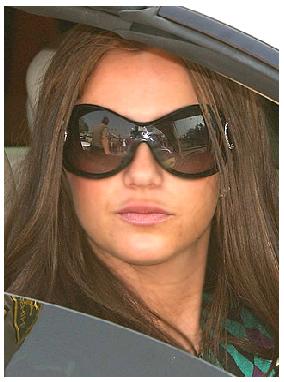 In the cover image showed innocent Britney Spears wrapped in white silk sheets with magazine honest lines: “Britney Spears has lost her kids, her fans, her underwear and her mind,” which you could see here.

The highlights of the article about her in the magazine:

On being a child star, a former manager said, “She was the bread winner in her family. And when you know everyone’s living off you, you learn not to trust… She was never really taught how to live. Basic things: how to balance a checkbook, how things get done.”

On her breakup with Justin Timberlake, a friend said, “Ever since then, she’s been mad at the world.”

On “Chaotic” and her relationship with Kevin, one adviser said, “Chaotic destroyed the image that we had worked so carefully to create. She thought that if she showed the world everything, everyone would love her for it. What it did, instead, was make her look like white trash – and that is not what she is. She’s better than that. It created an appetite for this wild and crazy girl and created this spiral where nothing can satisfy that appetite.”

Shocking revelation: Danny Haines, who is 29-year-old man who met Britney Spear’s manager Sam Lutfi, over MySpace in the fall of 2005. He divulges shocking details about Lutfi’s dark past (including at least three outstanding restraining orders and a violent temper) and how he may be a driving force behind Britney’s actions.

On their relationship: To Haines’s fractured ego, Lutfi’s social skills and emotional intelligence were magnetic. He encouraged Haines to “stand up for himself” and at the same time worked to become indispensable to him. Lutfi ingratiated himself with Haines’s family, acting as a go-between and informal counselor. Haines says that their relationship was not romantic or sexual but that Lufti was more jealous than a lover. He could be supportive one day and vicious the next, leaving voicemails tracing extremes from “You’re a worthless motherf***er” to “I love you, man. I love you to death.” He says that…Lutfi reserved most of his energy for emotional blackmail and extortion. “Everybody hates you,” he wrote to Haines, suggesting that Haines should just kill himself: “Seriously, sleeping pills, LOTS of them…”

The threats: When Haines finally cut the cord, Lutfi humiliated him. He e-mailed [email protected] photographs of Haines to his family, friends, colleagues and employer. He texted and called incessantly, telling Haines he hoped his sister would be “raped to death” according to the restraining order…such communications moved Haines to seek the restraining order, which also protects his mother from being contacted by Lutfi.

Haines, whose relationship with Lutfi was the subject of a few obscure blog comments after Lutfi’s other restraining orders were reported in December, says that he subsequently received an e-mail from Lutfi’s sister’s address, which he read as a warning: “One of your friends is writing to some magazines about your history with my brother…I don’t think that’s wise for him to do.” The warning came with what sounded like a threat: “Those pictures and your history isn’t so positive either and I’m sure you wouldn’t want that to be public as well.”

“If Sam’s not doing anything wrong with Britney, if he’s not worried about being exposed,” Haines asks, “why would his sister be saying, Don’t talk about my brother and his past?”

Britney’s parents reaction: Informed of the details of Haines’ relationship with Lutfi, Jamie and Lynne Spears, who declined to discuss Lutfi on the record, both expressed grave concern to Blender about his ongoing involvement in their daughter’s life and have encouraged Haines to go public with the story.