Britney Spears is a mega pop star, a mom of two – and now a happy homemaker in her new video, according to the sources. 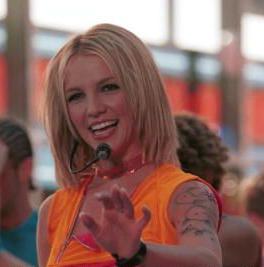 The singer, who plans to hit the road for her Circus tour next month, spent Tuesday filming the video for her upcoming single “If U Seek Amy,” in which she plays a sexy housewife dressed in blonde ’50s style wig, fitted pink top and white skirt.

A source revealed: “The video begins with Britney coming outside her house to hand the paparazzi an apple pie that she baked. She acts like she wants to hook up. The video is very provocative.”

In part of the video, Spears is accompanied by two adorable perfectly-groomed children and a straight-laced man wearing khakis and a sweater over his shoulders. But a source says there are also lots of dancers “dressed in skimpy outfits in metallic color” and revealing costumes for Spears included in the shoot.

According to several sources, Spears was very professional and upbeat on the set. A source added: “She was like the old Britney at the shoot. She was engaged and excited the whole day and seemed like her old self.”

“If U Seek Amy” is the third single from the album Circus. Spears kicks off her new tour in New Orleans on March 3.