Britney Spears’ has hit the controversy with her recent bizarre behavior but this time there are reports, including suicide note written before her January 3 meltdown, as the troubled pop singer stepped out of a changing room in a upscale clothing store stark. 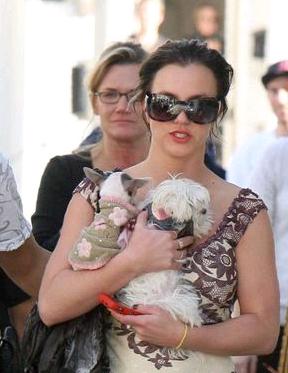 Alli Sims, the cousin of Britney Spears, made a warning note on the paparazzi beau Adnan Ghalib, saying, “I don’t know him. I only know who he is through him following us for the last eight months. I do not think Adnan is a good person; I think he only has bad intentions. He has always given me a weird feeling and creep me out. I wish he would just go away.”

It was also reported a story that Britney left a suicide note has been trashed by Britney’s manager Sam Lutfi but the original story claimed that Britney’s “very sad” note was “filled with reasons why she shouldn’t live, including lines from poems about death” was found by Sam.

As for Britney walking around [email protected] while shopping at the Betsey Johnson store at the Westfield Fashion Square in Sherman Oaks on January 13, the “Gimme More” singer came out of the changing room stark [email protected], according to a sales clerk at the store.

As she walked into the upscale clothing store, Britney Spears grabbed a couple of dresses and went into the changing room with Adnan Ghalib. A little later she stepped out completely [email protected] to the utter astonishment of every one present.

When the sales clerk tried to cover her up she went ballistic “Get away from me! Don’t you f—— come near me!”

The sales clerk added, “Then she disappeared in the dressing room with Adnan for 45 minutes. They were making weird noises. It was disgusting.”

After the two emerged Britney Spears was mumbling something. The employee said, “I couldn’t understand a word she was saying. She was slurring and spitting, and talking with a British accent. Her face was covered with cold sores and acne, and her scalp was patchy. I wanted to help her, but she was so mean that I left her alone. Then she muttered, ‘F— you!’ and left the store.”