Britney Spears and her sons sent out a special holiday card to all fans on the singer’s web site on Tuesday, December 23. 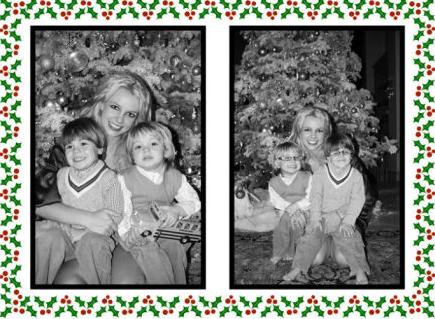 The “Circus” singer and her two sons, Jayden James and Sean Preston, wished them a happy holiday.

According to a report, Britney Spears will spend the holidays at home. The singer revealed at the “Light of the Angels” Holiday Tree Lighting Ceremony in Los Angeles: “It’s family time… do the tree thing. The family comes over. It’s fun.”

Meanwhile, Britney Spears has reportedly parted ways with her long-term choreographers. She has decided against continuing her relationship with Wade Robson and Andre Fuentes, who she has worked with since 1999 and 1998 respectively.

A source revealed: “Wade and Andre were only hired to choreograph the promotional tour for Britney’s new album ‘Circus’ which ended in Japan last week.”