Cameron Diaz was recently spotted going out of LAX on her way to Virginia, to lens her next big film, “The Box”. 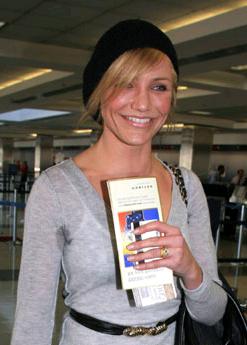 Her new film is a thriller about a struggling husband-and-wife who find a wooden box on their front entrance. When the box is opened the couple becomes rich but opening it causes the death of an unknown person.

She was previously seen at an afterparty for SNL with Bradley Cooper as well as walking with the attractive star through New York’s Central Park.

In this recent picture above, Cameron Diaz was sporting a pair of skinny jeans, black boots and belted V-neck sweater. The beret seems a fashion statement but the actress used it to match it with her casual outfit.