Cameron Diaz has sparked engagement rumors by sporting a huge ring on her wedding finger. 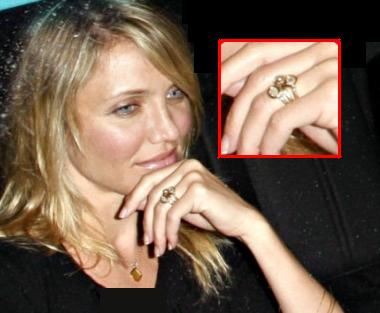 The “Charlie’s Angels” actress appeared to flash the dazzling ring at photographers as she left the Nobu restaurant in Santa Monica yesterday, indicating that her relationship with new beau Paul Sculfor may have taken a more serious turn.

Earlier this week the 35-year-old star was pictured looking blissfully happy as she kissed and cuddled the bricklayer-turned-model, who previously dated Jennifer Aniston, during a day out in West Hollywood.

The celebrity couple couldn’t keep their hands off each other as they enjoyed a dinner date before strolling to a nearby boutique.

Cameron Diaz, who was devastated by the death of her father earlier this year, has been single since splitting from Justin Timberlake in 2007.

He is also a close friend of Victoria Beckham and has dated TV presenter Lisa Snowdon.