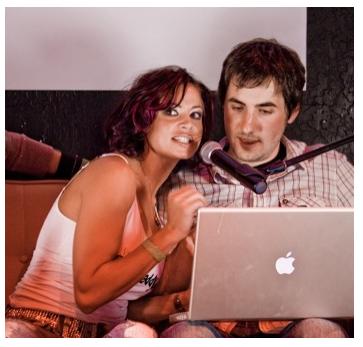 WWE Diva, which you could see her photo here, continued to ramp up her sexy image while she’s recovering from surgery to repair her broken clavicle.

She appeared on the “Internet Superstar” web TV show, and even The Wall Street Journal had to post a comment on Candice’s outrageous appearance.

She revealed, “A guest last week was Candice Michelle, the chesty spokesmodel in a 2006 Super Bowl TV commercial for domain-name site Go Daddy, a spot that many men seem to have no trouble remembering.”

She continued, “Mr. Sargent asks her about her second career as a wrestler, and Gator reads her a poem expressing his innermost feelings. The crowd hoots and whoops. Later, without warning, Ms. Michelle will pop open a beer on stage and pour it all over the front of her halter-top. Funny thing is, it wasn’t even on fire.”

It’s even wilder than the Journal reported. Candice’s impromptu beer shower caught even the producers of the show off guard.

She added, “We were totally unprepared for it to happen, but we’re sure glad it did. Candice has a huge following, and the moment she poured beer all over her tight white t-shirt, we knew we had a video clip that would become an instant classic.”