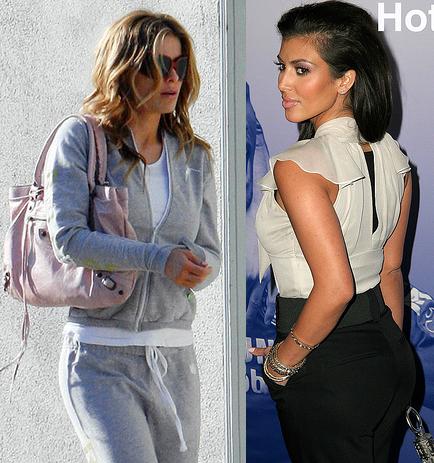 Carmen Electra, who is a 36-year-old actress, explained during Comic Con in San Diego, California: “When we shot the scene, the movie wasn’t even out yet. We literally just watched one scene in the trailer and sort of spoofed that.”

The stunning actress says she’s not concerned about Angelina Jolie’s reaction because it’s “not anything personal, saying: “It was more about the bullet and sort of bending it the way her character did.”

Her co-star Kim Kardashian thinks that Angelina Jolie will approve the spoof. The 27-year-old actress revealed: “She’s going to think it’s hot, because Carmen looks hot, and did it justice. It’s all good.”

Kim Kardashian, for her part, spoofs High School Musical. The stunning actress admitted: “I guess it might have been Vanessa Hudgens’ character, but I don’t really know who I was because I haven’t seen the movie.”

She revealed: “I do love all the High School Musical girls – They are all adorable. My little sisters have seen the movie dozens of times.”

The two actresses told Us they had a blast working together. Carmen Electra added: “It was kind of weird because we met and then all of a sudden we had to get into the ring and fight.”

Kim Kardashian added, “And when Carmen would pull my hair she kept asking, ‘Are you all right? Did I hurt you?’ And I was like, ‘Yeah I’m okay.'”