Carrie Underwood, who graced the cover of Elle magazine for its December issue, cleared the air on what’s really going on with her and Michael Phelps and she also revealed the last time she spoke to Jessica Simpson’s beau Tony Romo. 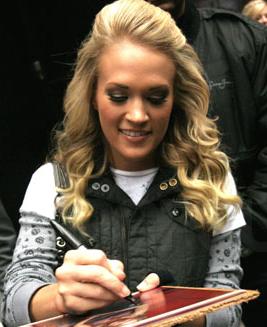 On the rumors of her dating the Olympic swimmer, the country singer declared: “I swear on everything, on my job, on my house, my dog…That’s how serious I am. It’s all just a lie. Anytime any [media source] ever says ‘a friend said,’ or ‘a close’ whatever – no, they didn’t! It’s just made up. None of my friends would say anything. Ever. About anything!”

On keeping in contact with the football player Tony Romo, she explained: “It was just something that was said in passing, and I would never mean to say anything to hurt anybody or to stir up anything, because I’m just not about drama. I might be mad too if somebody said my boyfriend was calling some other girl. So I can definitely see where [Jessica] would be coming from. But I haven’t talked to him since, like, May.”

As for reports that Simpson was upset by the claims, Underwood says, “I might be mad too if somebody said my boyfriend was calling some other girl. So I can definitely see where [she] would be coming from.”

While Carrie Underwood has been linked to Travis Stork, a former Bachelor, the singer says she is not one to kiss and tell.

She added: “If I say I am [dating someone] or I’m not, as soon as this magazine comes out, it might be the opposite of what I tell you now. In three months, it’ll be ‘Carrie said she’s not dating anybody,’ yet last night, I was out on the town with some guy. He’s going to get mad at me. Everybody’s going to think I’m a liar. It’s just best not to go there.”