Kate Winslet, who graced the cover of Vanity Fair’s magazine, talked about exercise, Oscars and happiness. 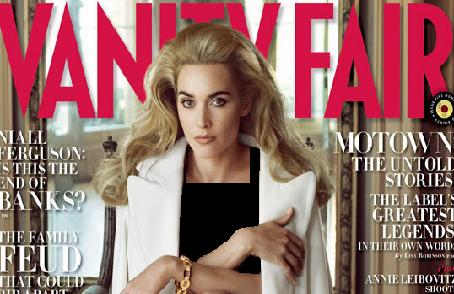 The “Titanic” star revealed that she never had any desire to be famous, saying: “I was fat. I didn’t know any fat famous actresses. I just did not see myself in that world at all, and I’m being very sincere. You know, once a fat kid, always a fat kid. Because you always think that you just look a little bit wrong or a little bit different from everyone else. And I still sort of have that.”

Here are the highlights of her interview with the magazine:

On hoping to be nominated and take home the trophy in Oscars, she declared: “Do I want it? You bet I do! I think that people assume that I don’t care or don’t want it or don’t need it or something. It’s hard to be there five times, and I’m only human, you know? But I don’t go home and cry, because we’re all grown-ups here.”

On acting, she revealed: “I know that in order to do my job as truthfully as I can–because to me that’s everything–you really have to not give a fuck [about what people think]. You have to be prepared to look stupid and you have to be prepared to walk around [email protected] in front of a crew of people you’ve never met before and may never see again. And it is scary.”

On being the youngest actress ever to earn five Oscar nominations, she continued: “I remember when somebody told me [about the record], I did allow myself a serious fist-punching-in-the-air moment. By myself in the apartment, you know, just leaping around and screaming and going, yeah!’ This wasn’t supposed to happen to somebody like me. I’m not the pedigree kid. I’m not classically trained. I didn’t come from the fancy home, no…. I mean, I seriously struggled through, and so for me to be me in this position, having had these nominations–it doesn’t happen that way, you know? It doesn’t.”

On working out, she shared: “Everyone can commit to 20 minutes, especially if there’s a glass of Chardonnay afterwards.”

On her idea of happiness, she added: “I need to be looked after. I’m not talking about diamond rings and nice restaurants and fancy stuff–in fact, that makes me uncomfortable. I didn’t grow up with it and it’s not me, you know. But I need someone to say to me, ‘Shall I run you a bath?’ or ‘Let’s go to the pub, just us.’ I mean, the things that make me happiest in the whole world are going on the occasional picnic, either with my children or with my partner. Big family gatherings, and being able to go to the grocery store–if I can get those things in, I’m doing good.”