Charlie Sheen revealed last night that Bree Olson broke up with him through a text message. 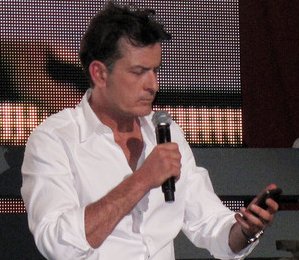 The actor had few guest on stage, which includes Dennis Rodman, in his tour stop in Ft. Lauderdale. He also offered support to Lindsay Lohan when he said that he would hug her and inform her that it’s gonna be okay. Charlie’s next tour stop is Tuesday night in Houston, TX.