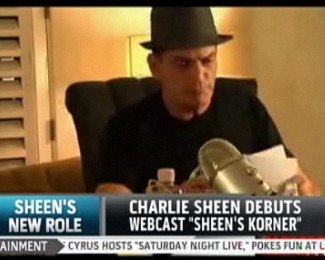 The viewer count for “Sheen’s Korner” fluctuated throughout the broadcast but there were 113,251 hits at one point. The actor was wearing a hat and a black t-shirt with a green dollar sign on its front.

Charlie introduced segments like  “Wish They Were Me” and “Weighing in With Rick.” He even showed a new tattoo on his inner left wrist that said “winning,” one of his latest catchphrases.