Chelsy Davy, who is the girlfriend of Prince Harry, was spotted while watching the “13th race” at South Africa’s premier racing meet at the weekend, she couldn’t help but giggle. 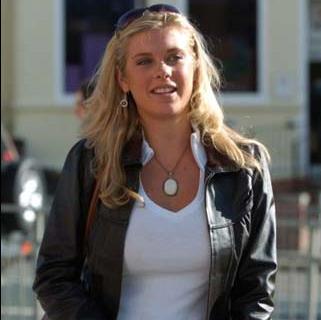 Then again, it wasn’t the sort of event that lent itself to a straight face.

According to tradition, after the last race of the day at Durban July, the course is opened up to those on Shanks’s pony.

And, as the picture shows, racing colors are strictly forbidden…along with any other item of clothing.

Up to 100 men stripped and set off under starter’s orders, egged on by the crowd. Miss Davy 22, who was with her brother Shaun, was clearly amused by the display.

An onlooker revealed, “Chelsy [Davy] was soaking up the sun in a VIP lounge for most of the day with her friend and clearly found the whole thing a hoot.”

The Zimbabwean-born student has been dating the third in line to the throne for more than three years.

She is on holiday in South Africa after finishing the first year of a postgraduate law degree in Leeds.

Whether Prince William’s girlfriend, Kate Middleton, would have approved of such a brazen display, is anyone’s guess.

Yesterday it was claimed that she had offered Miss Davy some friendly advice about the company she keeps. Harry meanwhile, was a couple of hours drive away, crossing the South African border.

For the few days, the 23-year-old Blues and Royals officer has been on an Army adventure training exercise with 25 men, most of whom he served with in Afghanistan this year.

They drove across Namibia and are now in Lesotho where they plan to spend three weeks working on building projects for Harry’s charity, Sentebale, which works with Aids orphans.

But the trip hasn’t been hard-going all the way with several stories of boozy exploits.

A source close to the prince revealed, “Yes, it’s a great experience and Harry and his men are enjoying themselves – it’s a pat on the pack after all they went through in Afghanistan – but there is a serious aspect to the trip and it is considered an important part of their Army adventure training.”

Royal sources say Prince Harry and his girlfriend plan to go on safari once his work is over.