Prince Harry sent his best friend to keep an eye on girlfriend Chelsy Davy when she partied in London on September 11. 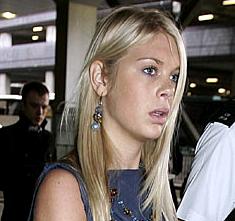 The 22-year-old prince was on Army training and he could not join the blonde beauty at Mayfair nightclub Mahiki, so sent Guy Pelly along to look after her and her friends.

Chelsy, 21, wanted to have one last night out at her favorite haunt before she travels north to Leeds to start her post graduate course at the university.

A fellow clubber at Mahiki revealed, “Chelsy was definitely having fun. She was out with two pals who could be clones of her – all three were tall, blonde and gorgeous.”

Chelsy enjoyed the club’s trademark tropical cocktails, before leaving in a cab with her friends at 2.30am.

Pelly, 25, is a close friend of both Harry and his older brother Prince William. He has been known to accompany William’s girlfriend Kate Middleton on nights out when the prince can’t make it.