R&B singer Chris Brown pleaded guilty on Monday to assaulting his former girlfriend, pop star Rihanna, in an agreement with prosecutors that calls for him to spend five years of probation and attend courses on domestic violence. 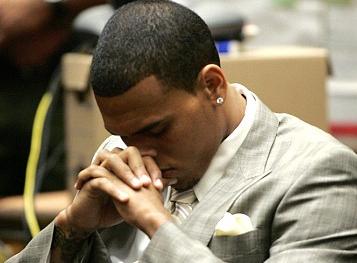 Brown, singer of the hits “Run It” and “Kiss Kiss,” will be formally sentenced August 5. He had faced four years in prison if convicted in a trial on charges of assault and a making a criminal threat. There was no plea deal on a second charge.

In addition to the probation and the domestic violence course in his home state of Virginia, Brown also must perform 180 days of community service.

He was ordered to keep his distance from Rihanna, 21, who was in the courthouse on Monday and prepared to testify against him.

Dressed in a gray suit, the singer was accompanied into the courtroom by his mother and an entourage of supporters.

“I think it’s commendable that you took responsibility for your conduct, sir,” Schnegg told Brown.

He was accused of beating Rihanna, whose hit songs include “Umbrella,” in a rented Lamborghini after the two attended a swanky music industry party in February on the eve of the industry’s Grammy Awards.

A police photo of Rihanna’s bruised and battered face taken after the incident was leaked to the media but details of what happened that evening have been scant. Brown’s plea means that evidence against him will not be heard in an open court.

“Rihanna believes this is a fair and just resolution to this case,” her attorney Donald Etra told reporters outside the courthouse following the hearing. He said Barbados-born Rihanna learned of the plea about an hour before the hearing was set to begin Monday afternoon.

L.A. District Attorney spokeswoman Sandi Gibbons said the plea was similar to other cases for first-time offenders like Brown and prosecutors had discussed it with Rihanna.