Clay Aiken apologized to Adam Lambert on his fan site Saturday morning — one day after he slammed the American Idol runner-up as “frightening” and said one of his performances made his “ears bleed.” 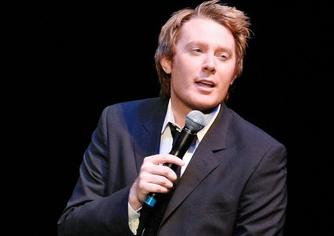 Aiken wrote on a fan site: “I’ll be the first to admit that my opinion is just that, only my opinion, but for as much as some of the bloggers seem to dislike me and care so little about my thoughts, they sure can waste a lot of their space on what I say! If only many of them took the time to pay attention to important things like the US economy and the welfare of the world’s children. But… nah… I could blog about that type of stuff anytime and most wouldn’t think twice, but let me say something that they can pick and choose quotes and misinterpret me… and it’s showtime! I never assumed my opinion mattered so much! I guess I may have been wrong.”

He added: “That said, since my previous blog got dissected like a biology lab frog, i suppose I should clarify and even retract some of what I wrote. I am sure that some were upset by my choice of words describing my opinion of a performance I heard from Adam Lambert. I hope no one actually believed that blood truly poured forth from my ears when I heard him. I obviously meant it as a colorful statement to imply that I did not enjoy what I heard. Any performer hopes that their music will appeal to all people, but no singer realistically expects it to. God knows, I am SURE there are PLENTY of people who can’t stand to hear me sing either. I wouldn’t dream of assuming that, and I am sure that far worse things have been said about my performances than I would even venture to type here. To me, that’s fine. I don’t expect unanimous, nor even majority support for my music. But, my guess is Adam doesn’t either. I would not venture to make judgements [sic] on the personality or demeanor of anyone I don’t know, so none of what I said in my previous blog was directed as a ‘slam’ on Adam as a person. At the same time, I wouldn’t dream of slamming him as an entertainer. He does what he does, because he enjoys it, and he obviously has many fans who enjoy it as well. If what I said in my previous blog regarding my impression of a single performance from Adam upset or offended any of his fans, I expect that the mature ones will realize that it was simply a poorly worded metaphor describing my personal tastes. The only person I would really dream of apologizing to is Adam. And the irony is, if he’s smart he couldn’t give a crap what I think of his ‘Ring of Fire’ performance. As an entertainer, Adam knows that one person’s opinion of one performance really matters a little less than zero, in the grand scheme of things. He could not have gotten on Idol (nor made it as far as he did) without an immense amount of talent. He surely doesn’t need my approval to know he has a gift. At the same time, he realizes that amazing talent doesn’t always equal universal appeal. (I could NEVER have the amount of skill and talent that ballet dancers have! that’s talent! But, I don’t particularly enjoy it!) I am sure that I will have plenty of opportunities in the coming years to hear Adam sing. I imagine he’ll be around for years to come. But in the meantime, I definitely don’t want to stoop to the level of so many negative freaks on the internet… so, I do apologize to Adam for my colorful (and negative) choice of words. I hope he can forgive me. I imagine he doesn’t give a d—! God knows he shouldn’t.”