Corbin Bleu opens up about his dreams, nightmares, and which celeb’s wife he’d like to steal! 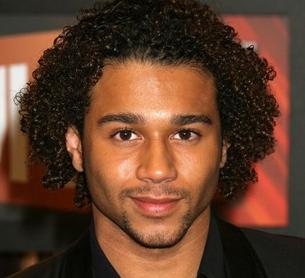 How old were you when you had your first kiss? “14. It was around Halloween season at Knott’s Berry Farm. I had a crush on her, and it happened on one of the rides, in the dark. I wasn’t quite expecting it at first. I had no idea what I was doing.”

Who’s your celebrity crush? “Angelina Jolie. I love everything about her. She’s fierce, and she’s definitely a strong woman, but she’s still smart, and kind, and a humanitarian. She’s still got that bad girl side to her. Perfect, perfect girl. She’s taken, but it’s all good.”

What’s the fashion trend that confuses the heck out of you?
“The mis-matched jewelry thing. When there’s twenty bracelets and, you know, six necklaces and none of them really match? It’s something I see a lot of girls doing.”

What’s the girly movie you secretly love? “Is The Devil Wears Prada considered a chick flick? Every time I see it, I love it. And every time I tell someone I love that movie, they say “Really?!?” And I’m like, “Yeah, what’s wrong?” I love The Devil Wears Prada. I love Meryl Streep. She’s my favorite actress. Anne Hathaway does an incredible job, too. And the story is awesome.”

Who would play you in the movie version of your life? “I’d say Jayden Smith would play me younger, and Will would play me older. I’m a big fan of Will’s work. I hear he’s just a great guy overall, as well.”

What’s your dream job? “I would have been a doctor. Science and math have always been my strong subjects. I was going to be a pediatrician because I love kids, but I had to choose between the two of them at a certain point. But I love what I do.”

If you could trade places with anyone in the world for one day, who would it be? “Right now, it would be Barack! I would love to know what’s going through that man’s mind right now. I’d only want to be President for a day. It would definitely be a one-time deal. I’ve always been good when it comes to politics. When it comes to being political about certain subjects. I would like to be able to lead. But being able to lead from a presidential standpoint is a different story.”

Who in your family are you closest to? “I have my two parents and my three younger sisters. Between all of us, we’ve always been a pretty tight-knit family. But I guess…I’m closest to my father. He traveled with me everywhere, so we’re like partners. I’m with him all the time.”

What’s your favorite website? “I’ve never been a website person. I check my email, that’s pretty much it.”

What’s your worst habit? “Not getting out of bed when I’m supposed to. I will hit the snooze button 10 times.”

What’s the last song you listened to on your iPod?
“American Woman” by Lenny Kravitz.

What’s the last thing you bought? “I bought Adele’s CD. I don’t download music. If there’s a song I want, I will go buy the whole album. From an artist’s standpoint, I feel like each song coincides with the rest of the album like it’s supposed to, and I feel like it’s a full story. I like to support other artists, and if they took the time to make an entire album, I’m going to see the whole album. Also, when it comes to the packaging of the album, the inside cover, the inside slip, that’s something they leave out when you just download songs. That also goes into a person’s artistry. I’ve just always been a big supporter of other artists.”

What did you dream about last night? “I just got Lasik surgery yesterday, and I had a nightmare last night that I was reliving the whole surgery! And normally it would be fine, but you’re awake for the surgery. They numb your eye so it’s not like you feel anything, but it’s just the fact that they literally saw your eye open and put a laser in it! You’re awake and you see it!”

How much money is in your wallet right now? “I probably have like, 20 bucks or something. Who knows.”