Whom would sexy race car driver Danica Patrick want to play her in a movie? 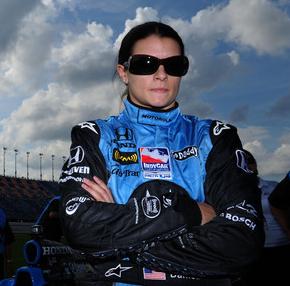 She went on, saying: “Although I don’t quite look like her.”

What about Jennifer Aniston?

“I don’t think that’d be age appropriate,” she says of the He’s Just Not That Into You star, who just celebrated her 40th birthday. “She’s older than me!”

Aniston and Jolie are set to face off at this Sunday’s Academy Awards — the first time they’ll have seen each other since Brad Pitt and Aniston split in 2005.

John Mayer will be on the arm of Aniston, a presenter, while Jolie and Pitt are both up for awards.