The Harry Potter star has spent his youth playing a boy wonder. Now, at 19, he breaks free as he dished on his dating taste and more. 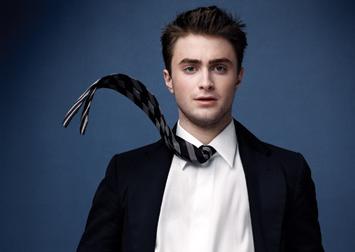 On posing while holding a magic wand and wearing the trademark Potter spectacles, he politely declined, saying: “I’ve now reached a stage in my career where I am starting to break away,” he says. “I just think I’m a bit too old for that now.”

On sounding more like he should be heading for a nursing home instead of playing a teen wizard, “I’ve noticed I make noises when I get up and sit down now. I mean, my knees are rotten bad—I refused to wear knee pads too many times when I was doing stunts, and I just clobbered them up a bit. I am an old man in a young man’s body.”

On his dating taste, “Girls my own age are not really an option. I find, generally speaking, they have to be entertained more than older girls do. So most of the girls I have had serious things with are generally sort of in their 20s.”

On his childhood, “I’ve had a happy and very healthy, really enjoyable childhood, and a fantastically interesting one. I genuinely think I am a better person for having done these films than I possibly would have been had I not.”

On being declared England’s richest teenager, “I have been very, very fortunate. But I’m not going to spend it on flashy cars or particular extravagances. Money will never be the focus for me. That’s not how I’ve been brought up.”

On his confidence, “Before I did Potter, my confidence had been more or less destroyed by a couple of teachers. So I had it all restored by the people who taught me on the films.”

On having moved out of parent’s home and into a place of his own in London, “It’s a bit weird. The first few weeks you’re getting used to living alone, which is bizarre, but I really enjoy it now, actually.”

On his career, “I’ve now reached a stage in my career where I am starting to break away.”