American Idol winner Kris Allen has had a totally different post- Idol experience than runner-up Adam Lambert, managing to stay out of the limelight and off the cover of Rolling Stone. 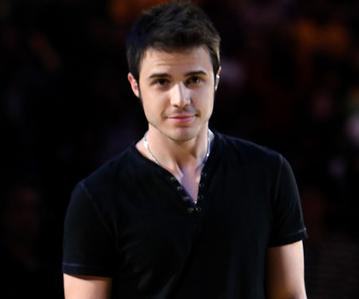 Allen insists he has nothing but love for Lambert, but he’d rather focus on his music and finally get a shot at married life with childhood sweetheart, Katy.

Here are the highlights of his interview with Parade magazine:

Getting back to business with the Top 10 tour, “It has been really nice. We’ve been crazy busy, all of us. It’s nice just to hang out with everyone and see everyone. It’s going to be a fun tour and it’s just fun to work and do what we’ve wanted to do in the first place.”

Penning his first song, “I was in my first year of college, and I wrote a song called ‘The Real World’ and it was horrible! But you live and you learn. The thing that inspires me the most [when I write] is stuff that is happening in my life at that time. Whether it be the good, the bad, whatever. It’s just about different people, friends, family and my wife.”

Serenading the ladies on campus, “I’ve been with my wife for seven years, so I didn’t do that. But I was known as the guitar guy.”

Will we hear a husband-wife duet in the future? “She is not a singer and she will be the first to tell you that. She does not like to sing where people can hear!”

Bringing his faith into this mix, “I want to make music that appeals to everyone. [Christianity] is a part of me, so that will come out. But for me, I don’t feel like I want to come out with a Christian record or anything like that. But if you’re making music that’s about you, then that’s going to come out a little bit.”

Adam Lambert commending him on his open-mindedness, “Me and Adam are really good friends. I learned from going to different countries and seeing different people that you can’t have a one-track mind about anything. There are so many unanswered questions. I’m never going to rule out anything so you have to have an open mind and it’s just about getting along with people and just having fun while we’re on Earth.”

Is Lambert stealing the spotlight? “Adam is definitely one of those people who garnishes media attention. He’s different, and he’s something completely different from Idol and so I think he deserves all that stuff. And for me, I’m totally laid back and cool. Being on the cover of Rolling Stone, he had something to say and they wanted to be the ones to say it. That was his way to do that. I don’t have any problems with it at all. I think Adam totally deserves it. I don’t feel like he’s stealing my thunder.”

On Simon’s advice to have kept his marriage a secret to get more votes, “Stuff like that, what judges say, you have to take with a grain of salt. That never even bothered me. But I felt Kara [Dioguardi] got me the most as a writer and artist herself.”

Finally settling into married life, “It’s nothing normal. It’s more like the craziest boyfriend-girlfriend situation right now. It doesn’t feel too much like we’re married just because it’s a completely different married life than we’ve expected, but it’s still really good. We’ve learned that you gotta take things a little bit differently being like this. [if it wasn’t for Idol] it would probably be just me and my wife sitting and having a comfortable life, and that would have been fine too. But it happened to work out this way.”

Finding a balance, “There’s definitely been people that I’ve hung out with that have been doing it for a while and understand how to balance the married life and this kind of stuff. There’s people that do it well and people that I look up to.”