Keeley Hazell urges England fans to forget their Euro woe and to concentrate on the big one as she posed with the World Cup, and predicted the Three Lions boys will soon get their hands on the trophy everybody wants. 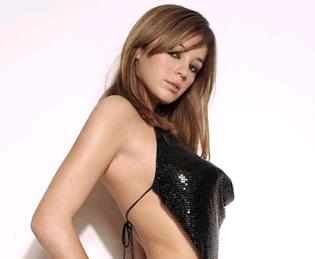 The “Page 3” beauty insisted, “We can bounce back and go on to win the World Cup. Once the draw for qualifying is made we’ll be able to concentrate on the future and put the Croatia game behind us.”

She added, “I’m calling on England fans to get behind our boys and cheer them on all the way.” You could see her steamy picture with a World Cup here.

As for the other news, Keeley Hazell has topped a poll of the Top 20 Movie Nude Scenes of 2007 when she lands the second spot for “Cashback”. Mr. Skin labeled her as “volcanically voluptuous all-natural British beauty”.