Seventh-season “American Idol” runner-up David Archuleta is standing behind eighth-season runner-up Adam Lambert’s decision to announce that he is gay. 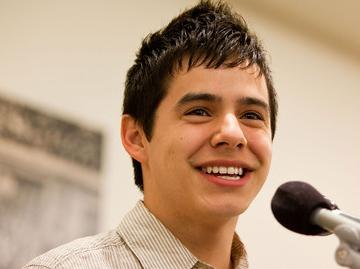 Following the outpour of support from “Idol” judges, fellow contestants and fans, Archuleta announced his respect for Lambert and downplayed the overall significance of the revelation.

“I know it’s always interesting and surprising and shocking [to people] when they say those things, but that’s up to them, it’s their lives,” Archuleta said, according to a report from Rolling Stone. “I don’t think it was a big surprise.”

Archuleta was speaking in Washington, D.C., where he attended the Children Uniting Nations gala and performed a fan favorite from his “Idol” days, John Lennon’s “Imagine.”

Addressing Lambert’s decision to stay mum on his sexuality throughout the talent competition, Archuleta said: “I don’t think he was trying to be all sneaky and secret about it. I’m sure he was happy with who he was and stuff, it’s not like he was ashamed.”

Like many of the people MTV News has spoken with about the revelation, Archuleta was not surprised when Lambert came out of the closet. “I just kind of assumed it; I think everyone else did too,” he said. “I don’t think it’s a bad thing or anything.”

Remarking that Lambert was “really cool” when the singers met at a recent “Idol” performance, Archuleta went on to pay respect to the man’s talent. “He seems really confident when he’s onstage, but I don’t think it comes across as cocky or anything, and when I talked to him, it seemed like he was appreciating everything that was going on, and he was really grateful for those opportunities that he had,” he said.