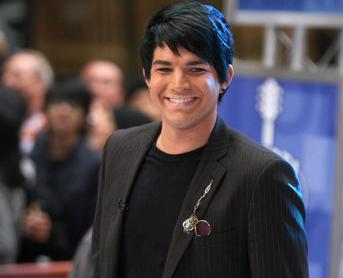 Lambert, 27, recently disclosed his sexuality in an interview with Rolling Stone magazine.

The Boston Globe reported that while other celebrities have disclosed their homosexuality after becoming popular, Lambert is one of the first to do so just as he is beginning his life as a rock star.

“There is something very contemporary about it — the fact that he is speaking openly about his sexuality, defusing it at a very early point in his career, making his calculation that he is going to be able to be a big success,” Tavia Nyong’o, a professor of performance studies at New York University who studies race and sexuality in the arts, told the Globe. “He’s doing something very new and uncharted in pop culture.”

Freya Jarman-Ivens, a lecturer in music at the University of Liverpool and the editor of “Oh Boy! Masculinities and Popular Music,” noted gay pop stars such as Elton John, Clay Aiken and George Michael generally behave differently on stage than traditional rock stars do.

“They’re never alpha-male types,” Jarman-Ivens told the newspaper. “I think it’s because they’re calling to a young female audience. They have to walk a fine line culturally speaking, between being very attractive to the female audience and not being threatening.”

“There’s always been something very interesting and sexy about a man who can rock eyeliner and heels and is also a brilliantly talented artist,” added Rosie Lopez, vice president of Tommy Boy Records.