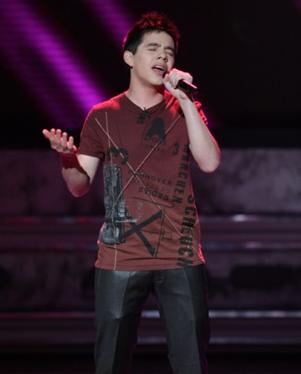 David Archuleta, who visited the “Extra” studios, shares his lessons that he learned from “American Idol,” his hopes for the future and shared his advice with the next season of Idols.

About his reaction to negative reports about his father, he revealed, “I haven’t been paying attention to press – good or bad…All this crazy stuff…He’s a great dad. I don’t want people to think differently…He [dad] says it’s been tough for him…He’s always been there, helping me out.”

On his appreciation on “American Idol” judges’ constructive criticism, he continued, “All the judges have just been great. I’ve learned a lot from them.” And as for Simon Cowell, David Archuleta declared, “He’s a pretty tough guy. You never know what he’s going to say.”

As for the biggest lesson David Archuleta has learned, he responded, “Always be yourself…Just remember why I love music. I’m not afraid of cameras anymore.”

On advice to the next season of Idol hopefuls, he shared, “Remember what they love about music and to just enjoy it…Be prepared for the work…[But] it’s so worth it.”

On his other plans, he added, “I just hope to continue working on music. I want to start on an album…I would love to write my own stuff.”