David Archuleta reaches out to the crowd as he performs at the Qwest Center on Saturday (August 15) in Omaha, Nebraska. 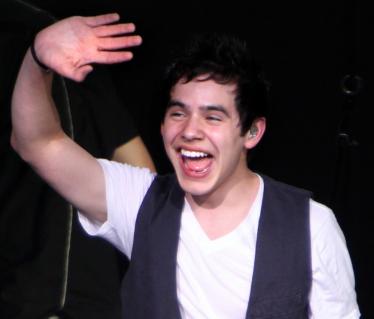 The 18-year-old American Idol runner-up recently caught up with MLive to chat about his recent TCA wins, solo shows and his upcoming Christmas album.

On his upcoming holiday record: “I’m really excited about the Christmas album, because it will show a side of music that I connected to on the show, but not so much with the pop music. It’s all about those emotional and heartfelt songs.”

On loving his solo shows: “I love doing my own shows. Everyone who comes out to the show actually paid to come watch you perform, which is a strange thought if you really think about it — haha. The crowd feels a lot more intimate, and I feel like I’m at a more personal level at my own shows. There’s just a great vibe that I feel from the audience, and it only makes me want to put on a better show.”

On the shock of his recent Teen Choice Award wins: “I think the breakout artist (award) was the most surprising and exciting for me, because it feels like I’ve been able to keep myself moving forward and continuing after American Idol.”