David Archuleta is working on songs every chance he gets while on tour, though he doesn’t expect any of his own compositions to make it to the release. Still, he’s planning on pop songs similar to his current single, “Crush.” 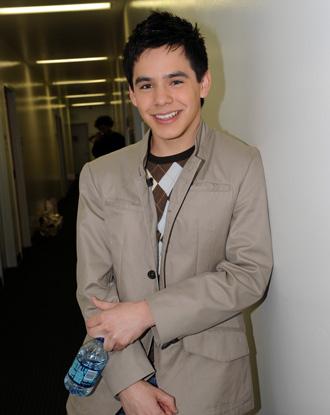 The singer, who was wearing a T-shirt emblazoned with a peace sign that matched his bright hazel eyes, has improved tremendously in his conversational skills.

The “American Idol” star revealed: “There isn’t time to really focus on what will really represent me – that takes time. So I’m just experimenting a lot. I won’t limit myself.”

The 17-year-old singer also revealed that he is also learning about music history by studying radio charts, exclaiming: “I love charts!” He exclaimed with that cute grin that has melted millions of hearts.

Right now, because of his age, the 17-year-old is accompanied by his dad, Jeff, on tour, but David Archuleta said his mom, Lupe, will probably swap in when the tour heads south, toward Florida, where she still has family.

The singer was grinning and gesturing toward Castro as he bopped by, on his way to another reporter, saying: “I do get along with him – as weird as he is! I’m stuck with that guy.

David Archuleta, who visited the Washington Monument earlier Thursday, said he also hangs out with Kristy Lee Cook and White – whom he calls the most “motherly.” But then added with another teddy bear smile, “Carly is like my mom in that she’s bossy…but in a good way!”