Kim Kardashian’s beau Reggie Bush may wear No. 25 on the football field, but he’s No. 1 to her – in fact, he may be The One. 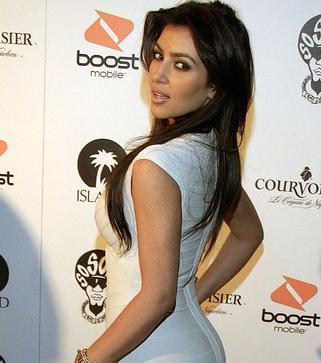 When asked if she already found Mr. Right, the reality star revealed: “I hope so. I think I finally made the right choice. He’s just a really sweet, normal guy.”

As for marriage, the stunning actress continued: “We talk about it. As soon as we’re done filming [Keeping Up with the Kardashians] I’m probably going to spend most of my time in New Orleans for a little bit until he’s done [with the NFL season].”

The running back for the New Orleans Saints wasn’t with his girlfriend Friday night as she performed with the Las Vegas Pussycat Dolls inside Pure Nightclub, but he got the next best thing – a sneak preview.

The socialite also revealed: “I did iChat him and I had my costume on for his approval. I did my whole dance for him when I was practicing last night. He thought it was so cute. He said, ‘Please videotape it so you can send it to me right after.'”

As for cameras at a bigger event, a wedding was still up for debate. The socialite added: “Without cameras. They’re going to want it, so you never know.”