With American Idol starting tonight, season seven runner-up David Archuleta is more than happy to offer his words of wisdom. 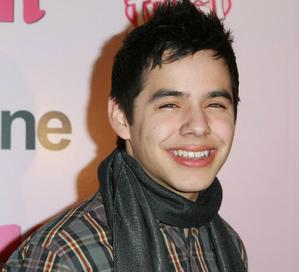 The 18-yer-old runner-up revealed: “The advice I’d give for contestants on the next season of American Idol is just to enjoy every moment of it. You never know how long it will last. It could end at the first audition or you could keep going until the end, which I sure wasn’t expecting to go to the finale.”

He continued: “But it was really cool, and you just have to keep a good attitude about it because if you focus on the stressful things, there are plenty of things to stress out about. But there are also a lot of great things to focus on and look back on.”

On the best thing that’s happened to him since becoming #2, He added: “There have been a lot of cool things. The finale was a really cool experience, and going on tour right afterwards with the American Idol tour was a really cool experience. Being out with the other contestants and not competing against each other – there wasn’t someone leaving every week – [laughs] it was really great to hang out with everyone. Working on the album, which was a lot of fun too, it was quite a challenge to do that while on tour, but it was a great learning process.”

Meanwhile, Recording artist David Archuleta was spotted as he performed at the Hard Rock Cafe- Times Square on January 12, 2009 in New York City.