Hundreds gathered to honor David Carradine at a sprawling hillside cemetery on Saturday during a funeral that was attended by family, former co-stars and other Hollywood friends. 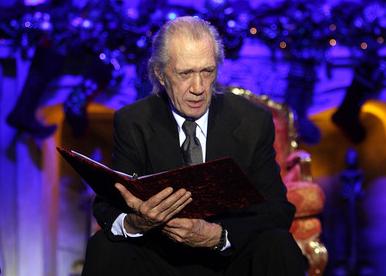 The invitation-only services were held indoors at the Hall of Liberty at Forest Lawn-Hollywood Hills, a 400-acre cemetery laid out adjacent to Los Angeles’ Griffith Park.

Mostly gloomy skies prevailed outside, with cold blasts of wind sweeping across the cemetery. The funeral lasted more than two hours and as more than 400 mourners left, clouds parted in the west offering a magnificent sunset.

Guests gathered and hugged outside the hall, where security ensured only invited guests gained entry.

They gathered more than a week after Carradine, 72, was found hanging in a Bangkok hotel room on June 4. Thai authorities continue to investigate his death. A statement released Thursday by a private pathologist said suicide had been ruled out as a cause of death.

Carradine’s family stayed out of sight from a small group of reporters and cameras. His burial was private. Brothers Keith and Robert Carradine asked for privacy and understanding while the family mourned in a statement released on Thursday.

Keith Carradine briefly appeared outside before the service and greeted some people before heading back inside.

Carradine is perhaps best known for his role as Kwai Chang Caine on three seasons of the 1970s hit show “Kung Fu.” His role in popular culture was cemented by the time he left the show after three seasons in 1975.

He continued to foster interests in Asian herbs, exercise and philosophy, and made instructional videos on tai chi and other martial arts.

Some mourners on Saturday opted for bits of Western flair, with some sporting cowboy boots and hats and turquoise jewelry. Keith Carradine wore a bolo tie.

Programs handed out to guests included a photo of a smiling Carradine in a tuxedo on the cover and sketch of the actor on the back, above lyrics to “Midnight Rider” by The Allman Brothers Band.

The program indicated several remembrances by Carradine’s family and song selections that included The Beatles’ “Let It Be” and Ludwig von Beethoven’s “Requiem for a Fallen Hero.”