David Cook, who was previously crowned as American Idol champ, has experienced a huge thrill after meeting his biggest fan Lindsey Rose Belcher. 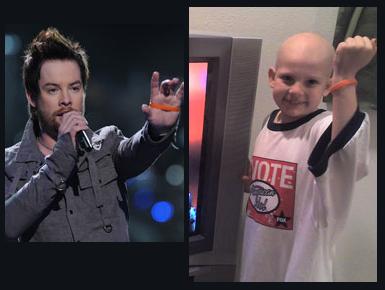 The 25-year-old “American Idol” has been wearing a plastic orange wristband onstage in support of courageous fan. The wristband was still in place as David captured the Idol title on May 21 and Lindsay, as usual, was glued to her TV at home.

Lindsey has been battling leukemia after she was featured for Tampa’s Fox WTVT Channel 13.

Her father said, “I called Lindsey right after David won and she was absolutely ecstatic, squealing with happiness.” She told me, “Daddy, I had a gut feeling all day that he was going to win!’ Then this morning, David actually called Lindsey directly! I can’t begin to describe what a wonderful guy he is, and what his support has meant to my daughter and our entire family.”

Lindsey and David are hoping to meet in person when the “American Idol” tour swings through Florida.
Lindsey’s father also added, “What David has done is a small gesture that means the world to a little girl who can forget she has cancer for a little while — and that’s what it’s all about.”