David Cook and David Archuleta, who are the “American Idol” stars, did Question and Answer with “Seventeen” magazine. 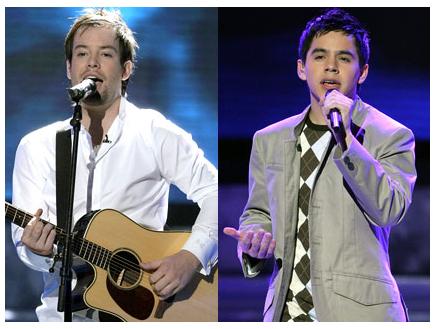 David Archuleta, 17, was the runner-up in “American Idol.” He turns out he’s even more innocent than he appeared.

When was your first kiss? He answered, “I haven’t had a first kiss.”

Who’s your celebrity crush? He replied, “I don’t have a crush on anyone yet. I’ve always been against that because it’s like you don’t even know who they are. It’s like when people have a crush on me, it’s just weird when they’ve never even met me. So for me to do that to someone else, it’s kind of weird. I look up to Sara Bareilles, John Mayer, and Jason Mraz.”

What’s a girl fashion trend that confuses you? He continued, “I don’t get those really short skirts.”

What’s the girly movie you secretly love? I only know of one, and it was good: A Walk to Remember. I hear so much about The Notebook, but I’ve never seen it. That’s the one all the girls were like, “Aww!”

His television guilty pleasure: Cartoons. He said, “I like Foster’s Home for Imaginary Friends. It’s funny! It has things that kids wouldn’t get. It’s like, if you’re mature, you get it. I like that and The Fairly OddParents.”

Who would play you in the movie version of your life? He shared, “I’m a pretty spacey guy, so it’d be funny to see how Robin Williams would act being me even though he’s old enough to be my dad.”

His dream job: To be doing what I am now, only more developed and have more experience in this. But this is my dream job, that’s what’s funny about it! I never thought I’d be here. I’m in the recording studio right now, just looking at the mics and the headphones and it’s crazy! If not music, I think it would be pretty cool to be an ear, nose, and throat doctor.

If you could trade places with anyone in the world for one day, who would it be? ”I think Will Smith would be pretty cool. He’s my favorite actor.”

Who in your family are you closest to? He answered, “I’m close with all of them, really; it’s just all for different reasons. My mom is just someone who’s easy to talk to and hang with. My sister, it’s always cool to be able to help her out with things. My brother is fun when we’re just joking and messing around. And my dad is someone who’s helpful with my music and easy to talk to about that stuff because he understands me in that sense. So it’s like different kinds of closeness with everyone.”

How much money is in your wallet right now? He answered, “I don’t know. I don’t carry my wallet around. I usually keep it in one of my hidden drawers in my room at my house.”

The best part of being 17: There are a lot of good things! Being able to hang out with friends and do all the weird stupid things together. People don’t usually do that unless they’re this age. I love going to random coffee houses that are open late at night.

David Cook, who was the current “American Idol” champ, revealed his Q&As:

When was your first kiss? He shared, “I was in seventh grade, so that makes me how old? Twelve or 13.”

His celebrity crush? He replied, “Not sure, actually. I’m gonna say Burt Bacharach.”

The girl fashion trend that confuses him: He answered, “The whole uncomfortable-shoes thing. I understand to a degree the “pain is beauty” thing, but the whole scrunching your toes into a shoe that’s two sizes too small because it matches your dress seems a little absurd to me.”

The girly movie you secretly love? He said, “Three to Tango.”

Who would play you in the movie version of your life? He replied, “My brother Andrew. Or myself.”

If you could trade places with anyone in the world for one day, who would it be? He continued, “I’m gonna go with my dog, Penny. I think there’s something very beautiful in being able to go through a day and not have to worry about anything except “Why didn’t my owner put food in my dish?””

Who in your family are you closest to? He shared, “I’m close to pretty much everybody in my family. I don’t know that I could single out one person. I’m a big proponent of family.”

His favorite Website: Funnyordie.com, specifically Will Ferrell’s “The Landlord.” Wow, I didn’t even have to think about that one.

How much money is in your wallet right now? He added, “I think $60 left over from when I took my brother to Santa Monica Pier for his birthday.”