On a phone interview the day before David Cook performed in Pfleeger Hall, Alexandra Harcharek spoke with Cook about his tour, success since American Idol and screaming female fans. 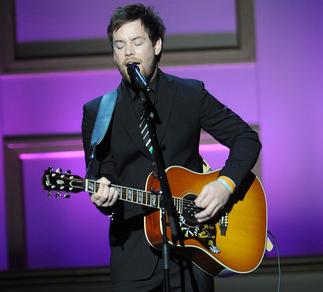 On his college tour, the “Declaration Tour 2009,” David Cook revealed: “I think people that watched Idol saw me confident but pretty stressed and pretty apprehensive about the whole process. Now they’ll see me crack a few more jokes and see me a bit more relaxed.”

On the difference about performing at colleges, he explained: “There’s a vibe at colleges that you don’t find anywhere else. It’s an under appreciated demographic. Plus if you can impress a bunch of music-snob college kids you’re doing alright for yourself. I was a music snob. If I had to go to a school and play for college-version me, I’d be petrified.”

On his feeling about some congratulations for new platinum album and single, he said: “I can’t count how many times I’ve been blessed over the past year. I think the record I put out before Idol sold 1,000 copies in a year. To sell 1 million copies in three months is pretty absurd. I’m going along for the ride right now.”

On the moment that Ryan Seacrest said your name and you knew you’d won, he shared: “I have no idea. That’s the only time in my life I can claim conscious blackout as the culprit. I honestly don’t remember. No clue. It’s just been instant celebrity. It’s weird to walk through an airport and have people want to take pictures of you. It’s a little unnerving. As someone who was raised and had a foundation in obscurity to be thrown into this is a trip.”

Does he freak out with the girls screaming, he responded: “Yeah, I didn’t have that before. [laughs] The girls weren’t screaming at me. At least not happy girls. I’d get screamed at, but not in a good way.”

On your guitar you have the letters AC, which you’ve previously said was out of superstition. What does that mean? he answered: “When I was in middle school, Adam was diagnosed with a tumor. As an homage, I started putting his initials, A.C., on everything. So when I really started getting serious about music, I put it on anything I could find. Now I have a tattoo with it on my left arm now. It’s kind of grown, and it works for both my brothers Adam and Andrew.”

How has your relationship with your family changed since this instant success? Has it made a difference with your brother, since he was the one who convinced you to try out? he also revealed: “I still have an amazing relationship with the both of them. My little brother can beat me up, fairly easily, he still does that. So nothing’s really changed. I can get them better Christmas gifts now, that’s the really difference for them.”

When you were on American Idol, your musical style was very different from anyone else. How much input did you get from the producers and how much was your own doing? he also revealed: “That was me being myself. I figured if I can’t do well and be myself, I probably didn’t deserve to win it anyway. I’d be much happier where I was, playing music for five people in a bar that was my music, as opposed to playing music that I couldn’t get behind emotionally. That was probably my biggest triumph on the show was that I was about to represent myself accurately.”

Which one bugged you the most, he admitted: “Oh, definitely Simon [Cowell]. I was so frustrated with him when I was on the show, then I got off the show and uh I quickly realized that Simon probably drove me more than any of the other judges, just because he was the hardest guy to please. Because if you can please the hard one then you’re doing something good.”

Is he as mean as they say, he said: “What you see is what you get. He wears V-neck shirts and parts his hair down the middle and drives a really expensive car. That’s Simon in a nutshell.”

On his feeling towards the changes in American Idol this season, he replied: “I haven’t really watched it enough to form enough of an opinion. I got a chance to work with the new judge Kara [DioGuardi] and she’s just an amazing musical mind. I can only see that helping the show. The wild card stuff, time will tell. Sometimes good talent can get passed over, so maybe giving them a second chance is a good idea.”

On his picks for this season yet, he answered: “No, not yet. But I did catch Nick Mitchell’s performance and I laughed hysterically. Amazing.”

On what’s next for him, if he is trying to step away from the Idol scene or is he still hanging on to that, he responded: “I certainly want to continue to grow as an artist, but I’ll be the last person to bite the hand that feeds. I think Idol’s given me an amazing opportunity and I’m proud of what I did and where I came from.”

On the greatest lesson he has learned since all this happened, he added: “You can only control yourself. And yesterday, somebody gave me an awesome piece of advice. If you can’t do anything about it, laugh like hell.”