David Cook has been in the limelight for less than two years, but he’s apparently already burned out by reporters asking him the same five questions. 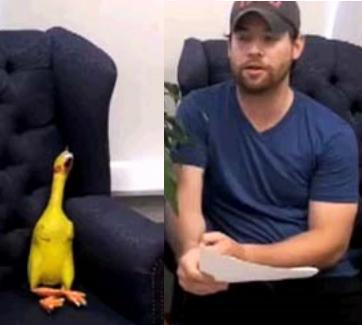 Among the vapid queries:

“Is Simon really that mean in person?”

“What’s the last year of your life been like since I won ‘American Idol?'”

“Who do you like better from Season 8, Adam or Kris?”

“What are your thoughts on Paula Abdul leaving ‘American Idol?'”

On one hand, I think the video — entitled “A Ficus Flows Between Us” — is a rather sharp satire on the state of music reporting. Bad questions that will make for easy “clickable” headlines? Check. (Although no “Twilight” question, David? Tsk tsk.) Generic responses from the artist/chicken which could all be interchanged with each other? Check! Fake interest from the interviewer after each answer? Yep, he nails that, too. One could even look deeper into the video and note that the chicken can’t respond until a hand squeezes it.

But on the other hand, David Cook should be careful not to come off as a jaded rock star. While I find the clip to be amusing, I could see how others might look at it and go, “Well forget that guy. I won’t bother interviewing him when he plays the California State Fair next week.”

The interview lasts for about four minutes and then second half is a series of outtakes.