Demi Lovato, who is the Disney teen sensation, charmed in a black ensemble as she left her Manhattan hotel en route to Madison Square Garden on Monday, August 11, 2008, to perform with the Jonas Brothers. 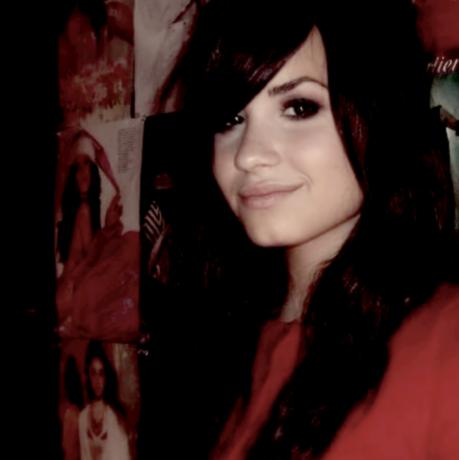 Her glossy auburn hair was left open draping her shoulders with eyebrow grazing sideway fringe covering half of her forehead.

Demi Lovato, who turns a sweet sixteen on August 20, is in New York City, along with the Jonas Brothers on their currently underway Burning Up Tour for which she provides the opening act. Their third and final performance in the city is scheduled for Tuesday, August 12 at Madison Square Garden.

While in city, she has also been doing the media rounds promoting her debut album Don’t Forget which is to be released on September 23rd in the United States via Hollywood Records.

Demi Lovato performed the first single from the album, Get Back, on Good Morning America earlier in the day. The Jonas Brothers have helped Demi write 11 of her album songs.

Demi Lovato, who has starred in TV series such as Barney & Friends and As the Bell Rings is now set to star in her own Disney Channel sitcom Welcome to Mollywood that begins production in September 2008. In it she plays Molly, a fifteen year-old small town girl who is given the chance to leave the country-side to join the cast of a long running teen sketch comedy series.

The young star, who can sing, dance, act and plays two musical instruments, started acting at the age of six. However, Disney Channel’s recent made-for-TV musical, Camp Rock, with the Jonas Brothers was her big break. In it she plays, Mitchie Torres, a talented teen singer who wants to become a pop star.