“The View” dismissed a report that co-host Elisabeth Hasselbeck was told to not wear a T-shirt supporting John McCain. 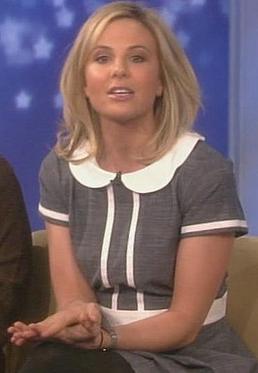 An online report suggested that Elizabeth Hasselbeck could not wear her pro-McCain shirt on the show after a conference call between ABC and “View” producers.

According to the online report, the apparent “View” insider claimed: “The number of complaints — phone calls and e-mails and even negative studio audience comments regarding the T-shirt were staggering, and the network does not want it happening again. How she got away with wearing it on air is anybody’s guess, but it definitely will not happen again.”

However, a representative from the daytime show said that the report is not true. The representative revealed: “Barbara Walters and Bill Geddie, executive producers of ‘The View’ don’t think it’s appropriate to wear tee-shirts (sic) endorsing either candidate, but would never forbid any of the co-hosts from expressing themselves.”

The representative, who also denies there was ever a conference call discussing the T-shirt in question, added: “Additionally, Elisabeth designed her ‘Great AmeriCAIN’ T-Shirt. She is a designer by trade and has shown it twice before on-air on ‘The View.'”