Emma Watson looked stunning at the world premiere of her new movie “The Tale of Despereaux” in Hollywood. 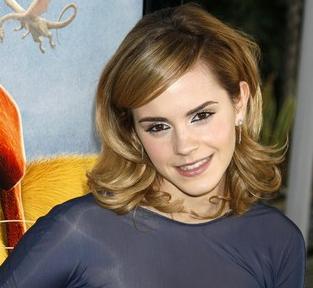 The 18-year-old actress, who has already been on the cover of Vogue, arrived at the premiere of her new animated film. She was wearing a stunning dark blue dress which showed off her perfect figure.

The British star, who plans to go to university next year, had a big smile for the camera as she posed on the red carpet in the satin dress and a pair of peep-toe black heels.

Last week the youngster looked slightly washed out when she attended the debut of In a Dark Dark House at The Almeida Theatre, in London, wearing leather trousers, an ill-fitting camisole and a slouchy cardigan.

But her rare style mishap seemed a million miles away as she posed with co-stars Dustin Hoffman and Matthew Broderick in sunny Los Angeles.

In the CGI film she provides the voice for the character Princess Pea.

The Harry Potter star signed a deal with Kate Moss’s modelling agency Storm last summer and was a fixture at both London and Paris Fashion Week this year.

The young actress has admitted to having a big interest in the fashion world and has become a regular face on the fashion circuit of late.