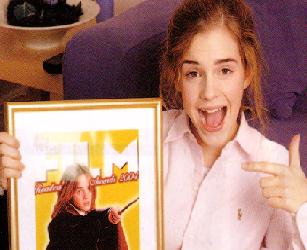 The 17-year-old actress, who plays as Hermione Granger, was honored for her role in “Harry Potter and the Deathly Hallows” in a ceremony at London’s ExCel arena on October 20.

The young actress, who wore a stunning gold-sequinned top and Diesel jeans as she collected her statuette after more than three million young viewers of the children’s TV channel Nickelodeon cast their votes online, revealed, “This is so cool. I’m so thrilled.”