Kate Hudson reportedly desperate to reunite with troubled actor Owen Wilson. Perhaps she may be too late for reunion as reports indicated that the actor was back with Carlolina Cerisola. 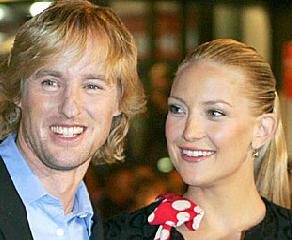 A report claims that Owen Wilson has even asked Carolina Cerisola to share his new home. The weekly entertainment magazine is reporting that the 38-year-old actor has asked his former girlfriend who has been at his side since he was released from L.A.’s Cedars-Sinai Medical Center, to move into his recently completed mansion in Malibu.

A pal of the actor revealed, “Owen is back with the woman he never should have left. The whole time he was with Carolina, he was sober and happy. I don’t know what made him split from her, but I am glad they are back together.”

Andrew and Luke, the brothers of the actor, are also believed to be thrilled with the couple’s reunion. The pal continued, “Now they can sleep easy, knowing she’s there to make sure he’s OK.”

As for the benefit of having Carolina as his roommate, the pal also revealed she’s a terrific cook who “buys all these organic foods and whips them into some gourmet wonders. A pal added, “Owen is eating well these days! Since getting back together with Carolina, Owen has found an inner peace.”