Emma Watson has been hard at work on one of her next films, “Perks of Being a Wallflower.” 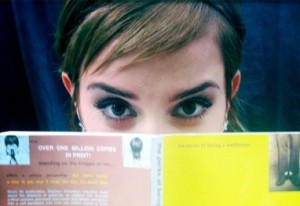 Logan Lerman has tweeted a bunch of photos from the set yesterday. The film is based on a book by Stephen Chobsky and focuses on teen’s letters detailing his experiences with sex, drugs and adolescence. Meanwhile, Emma first worked on “My Week With Marilyn,” while she is filming in the country.