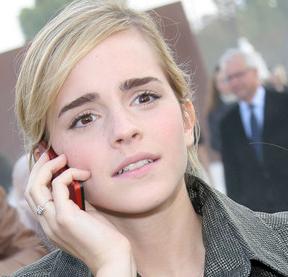 The “Tale of Despereaux” actress also dishing about the celeb she admires most and declaring that Twilight’s got nothing on the massive “Harry Potter” franchise.

What’s more fun: playing a wizard or a princess?
She replied: “Oh, a princess, any day! [Laughs] It’s every little girl’s dream! Definitely … especially such a pretty princess!”

Do you have a hard time getting away from just being known as Hermione?She answered: “I think it’ll take a while. I think I need to take on other roles before [laughs] … but obviously doing ‘Tale of Despereaux’ was great, to do something different and play a different role.”

You’ve said you sometimes ask Rupert and Daniel for boy advice — do you all keep in touch in between ‘Potter’ shoots? She revealed: “Yeah, I mean we have each other’s phone numbers and we’ll send a text and see how everything is getting on. It’s a little bit tricky when we’re not shooting, but yeah, we keep in touch.”

Speaking of ‘Equus’ … would you ever take a role that required nudity like that? She continued: “Ooh, never say never. I mean, if I believed in it … I’m not planning on doing it anytime soon, I’ll be honest with you! [Laughs] It really depends on the role and how I felt about it, but I would hope not for another five years, hopefully. [Laughs] I don’t know — we’ll see.”

What’s your take on all the buzz surrounding “Twilight,” which stars “Potter” alum Robert Pattinson? She admitted: “God, it’s massive! I have no idea! I haven’t seen it, so I can’t really comment, but I’m just gob smacked by the amount of hype and publicity that it’s getting. It’s incredible. I mean, I’m so happy for Rob — he must be over the moon. I’m so happy that everything’s so successful for him — it’s amazing.”

And what do you say to all the people calling it the next ‘Harry Potter’? She replied: “I haven’t heard that, to be honest — I mean, that’s quite a big claim to make! [Laughs] ‘Harry Potter’ is pretty massive!”

Who do you think is the better role model: Bella from ‘Twilight’ or Hermione? She said: “Not having seen the film [laughs] … it would be a little unfair to comment, but of course I will say Hermione, because she is just the best.”

Were you disappointed that JK Rowling never delved into Harry and Hermione getting together? She added: “No … I mean, to me it was always obvious that their relationship was purely friends. It always felt to me that she was very mothering towards him. It just wouldn’t be right. And I think that Ron and Hermione are so perfect for each other that I’m not disappointed. [Laughs] It’s meant to be.”