Last year, Emma Watson’s 18th birthday was a lavish affair at a trendy London restaurant with her famous friends. 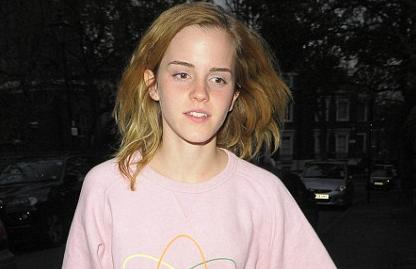 But this year, it appears the teenage Harry Potter star wanted to keep things a little more low-key.

Hard at work filming the latest in the series Harry Potter and the Deathly Hallows: Part I, Emma hasn’t had time to organize a big party.

In contrast to last year which saw Emma looking all grown-up in a black mini-dress, the tired actress opted for a comfortable ensemble of sweatshirt, tracksuit bottoms and sheepskin boots.

Her blonde hair was left down unbrushed and her babyface free of make-up, making her look younger than her 19 years.

After a long day filming her role as Hermione Granger in Leavesden Studios in Herts, the last thing Emma wanted to was get dressed up and go out.

Instead, she celebrated her 19th birthday with family and a few close friends at one of their London homes.

Writing on her official webpage yesterday, Emma said: ‘It looks like my birthday has snuck up on me. I sooo don’t want to be 19.

Growing up fast: Ten-year-old Emma when she starred in the first Harry Potter film in 2000

‘I can’t believe how much has happened.

‘I really can’t believe I’ll be in university in September. Still haven’t decided where to go…

‘So just a quiet one this year. As you know everything is so busy with my filming schedule. I’m really looking forward to a home-cooked dinner with my family.’

On her 18th birthday last year, Emma celebrated her coming of age with Harry Potter co-stars Tom Felton, Evanna Lynch and Katie Leung at the Mayfair eaterie until 4am.

Emma admitted in a recent interview with the Mail on Sunday’s Live magazine that her 18th was a bittersweet night after a photographer stuck a camera up her skirt.

She said: ‘It was pretty tough turning 18. I realised that overnight I’d become fair game. I had a party in town and the pavements were just knee-deep with photographers trying to get a shot of me looking drunk, which wasn’t going to happen.

‘The sickest part was when one photographer lay down on the floor to get a shot up my skirt. The night it was legal for them to do it, they did it. I woke up the next day and felt completely violated by it all.’

Despite her hectic schedule, Emma did manage to squeeze in a spot of partying over the Easter weekend.

Last Thursday, she enjoyed a spot of bar-hopping at Whisky Mist, before ending the night at her friend Liam West’s birthday party at Bungalow 8.