Emma Watson, who played the role of Hermione Granger, has revealed the details on filming for “Harry Potter and the Half-Blood Prince”. 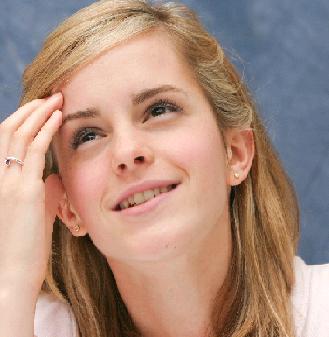 In her website, she wrote the details on her first scene working with actor Jim Broadbent, who will be portraying Professor Horace Slughorn in the sixth Harry Potter film.

The actress wrote, “It’s amazing to be working with him. It’s also great because I have been eating profiteroles ALL DAY at Slughorn’s dinner party!!!”

The young star goes on to note that she has been hard at work studying for her exams, and she also thanked all who supported her by watching her recent television film “Ballet Shoes.” The film “Harry Potter and the Half-Blood Prince” will be released on November 21, 2008.

Meanwhile, the “Harry Potter” star reportedly yelled at fan that mistook her for “X-Factor” finalist Sarah Smith, according to a report.

Emma exclaimed, “There is a difference!” and was not pleased when she was stopped by the very forward fan. Apparently, she did not like being mistaken for the homely singer.