She is best known for playing the same character since she was just 11 years old. So perhaps it is not surprising Emma Watson appears to have forgotten who she is. 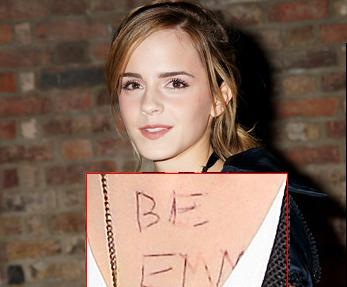 The 18-year-old actress, who stars as Hermione Granger in the Harry Potter films, was pictured with ‘Be Emma’ scrawled on her chest in ink after a night out with friends.

It is not known who wrote it. She looked slightly bleary-eyed as she emerged from fashionable Covent Garden bar Bungalow 8, having started her evening at the Whisky Mist club in Mayfair.

Despite her growing reputation as a teenage fashion icon – she has appeared in Vogue and recently signed a contract with Chanel – the actress stepped out in nothing more glamorous than a worn pair of jeans, T-shirt and black cardigan.

Miss Watson, who gained four As at A-level, recently revealed how she plans to take a break from acting and return to full-time education.

She has said she wishes to study for an English degree at one of America’s Ivy League colleges or at Oxbridge.

‘I would like to go to university,’ she has said.

And she has spoken of how she hates to be seen as a sex object.

‘I know everyone wants a picture of me in a miniskirt,’ she said.

‘But that’s not me. It’s nothing to do with protecting the Hermione image. I’d never go out in a miniskirt.’